Sergio Ramos earns his first red card as a PSG player as 10-man Paris Saint-Germain scrapped to a 1-1 draw against struggling Lorient at Stade du Moustoir on Wednesday night in a Ligue 1 meeting.

On as a half-time substitute, the former Real Madrid defender was making only his third appearance for Mauricio Pochettino’s side since making the switch from Santiago Bernabeu in August.

However, his action lasted just 40 minutes as he was dismissed for two bookable offences, while it took a stoppage-time Mauro Icardi header to make sure both sides share the spoils. 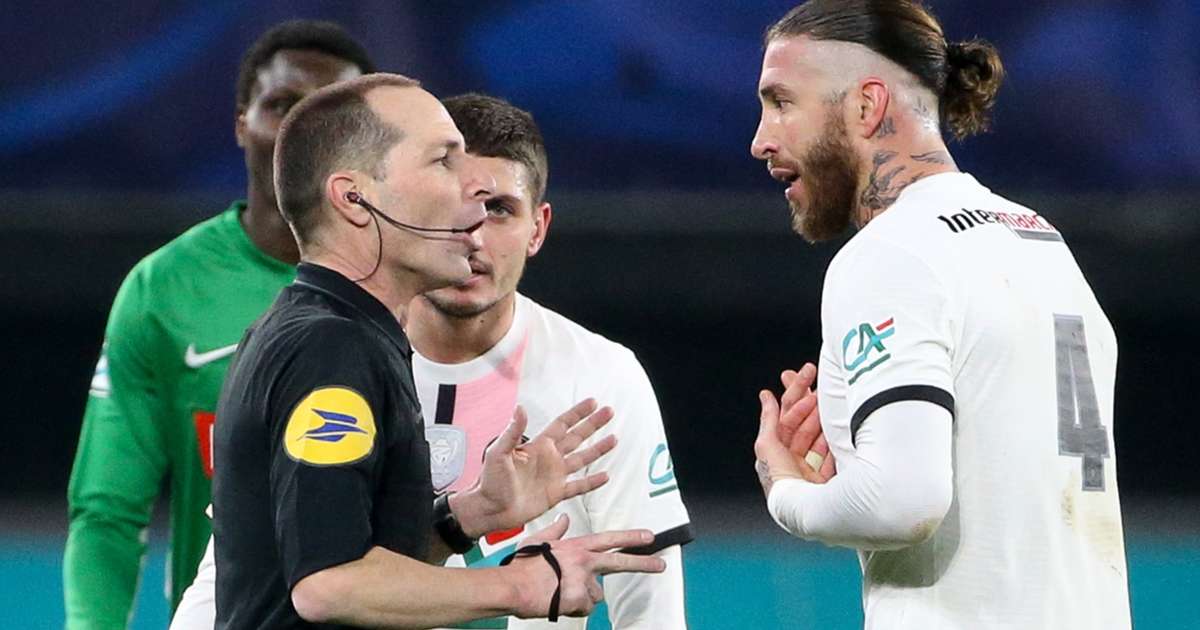 PSG defender Sergio Ramos in talks with the referee after he was sent off for a second yellow card in a Ligue 1 clash against Lorient. | PHOTO: Getty Images |

Thomas Monconduit’s thumping strike just before half-time had looked like it would be enough for the hosts, who at least ended their worst ever run of seven successive defeats.

At the other end, the hosts squandered a glorious opportunity as Terem Moffi raced clear and sold Keylor Navas the dummy, only to chip the ball straight at the grounded goalkeeper.

The woodwork then was Lorient’s rescue as a fierce Lionel Messi volley rattled the post from Icardi’s lay-off.

But the hosts got their just rewards for a positive first-half performance that yielded 11 attempts, Enzo Le Fee teeing up Monconduit, who beat Navas with a thumping 20-yard strike off the underside of the crossbar.

PSG turned up the pressure after the break and Angel Di Maria somehow fired over from 10 yards out with the goal at his mercy, before Paul Nardi produced brilliant reflexes to deny Messi from what was the first shot on target for the visitors.

The league leaders were reduced to 10 men as Ramos was shown a second yellow card for a body check on Moffi, yet they snatched a last-gasp equaliser with Icardi heading in from Achraf Hakimi’s cross. 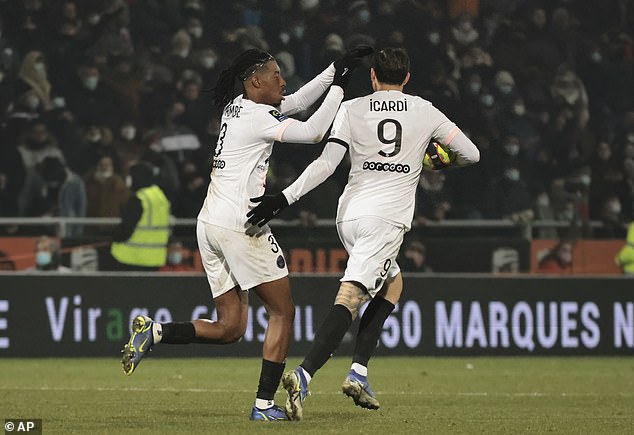 PSG forward Mauro Icardi scored a late equaliser to hand his side a draw against Lorient in a Ligue 1 clash. | PHOTO: AP/Getty Images |

The runaway leaders were just moments away from a shock defeat, but for the intervention of Icardi.

It took until the 80th minute for Pochettino’s side to register their first shot on target, although their dominance in possession and quality did eventually tell.

But spare a thought for Lorient, who held their own admirably and were seconds away from climbing out of the bottom three.

During what proved a tough day for the visitors, Gueye was one of their better performers in the middle of the park.

The former Everton man was involved in the most duels for his side (18), while registering a game-high five tackles.

Only Presnel Kimpembe (seven) gained possession more often for PSG than Gueye (six), who also completed 92.4 per cent of his attempted passes.

Ramos’ difficult start to life in the French capital continued as he received his first red card for PSG.

The Real Madrid defender, who has endured a string of muscular problems, was appearing in consecutive games for the first time since making the switch from Spain. But he will now be absent again for Pochettino after two silly bookings, a typical Ramos though.

PSG return to action in the Coupe de France on January 3 when they travel to fourth-tier Vannes. Meanwhile, Lorient does not play until five days later on January 6, when they head to reigning Ligue 1 champions Lille.

Ferran Torres move to join Barcelona, who could City replace him with?
Real Madrid extend La Liga lead with a win against Athletic Bilbao